Joseph is getting very creative lately. I keep thinking I should document some of the gems that come out of his mouth, so that's what I'm doing.

After a time out while I'm changing his diaper Joseph sings what I have dubbed the "Time Out Song."
(to the tune of Twinkle, Twinkle)
Time out, time out,
No, no, no.
Stand up, Stand up,
Face the corner.

Joseph is very in to declaring what he loves. Here are a few things he has declared that he loves lately:
I wuv cookies.
I wuv wawipops (lollipops).
I wuv ice cream.
I wuv EXercise!
(Do you see a pattern here?)

After playing at the park for a while I inform him that he can go down the slide one more time then it will be time to go home. He pauses then as his eyes light up he says "we can not go home!"

I'm pretty sure Joseph gave up at this point and didn't get his cup for him again. Sorry, John. Game over.

Posted by Betsy at 7:09 PM No comments: Links to this post

1) John is now officially a walker. I think New Years Day is the day I officially deemed him a walker because that's when he made numerous attempts to walk across the room without being encouraged to do so. And he can make it across the room sometimes. Yay!

2) John can also climb up and  down the stairs by himself (but don't worry, I still spot him just in case - he's not that good yet). This has been helpful because it was getting old (and exhausting) carrying him up and down the stairs all the time - especially if I had a load of laundry under one arm and him in the other.
3) Joseph isn't one iota interested in potty training and I'm not gonna lie - I'm starting to get a little nervous. We had a short spurt of interest several months back and had a few successes, but now every time I ask if he wants to sit on the potty he gives me a very clear "no!"
I'm learning that his short-lived interest in potty training is just a part of his personality (he is classified as an "impulsive child" according to a test both Will and I took at the beginning of the potty training book I'm reading). I believe the description they used said impulsive children will go "gangbusters" at the beginning of training then quickly lose interest. That pretty much describes what happened with Joseph.
I've also been a bit amused by the book because all of their descriptions of what an impulsive child is like are spot on. So much so that I actually laughed when they said the houses of impulsive children are "baby-proofed to the hilt" and that parents of impulsive children are "unable to hold a conversation with another adult because they can't take their eyes off their kid." True and truer.

4) What other nouns were used to describe my impulsive child? Energetic and active - yep (but really how many toddlers aren't energetic and active?). Early walker. Check (he walked at 9 months + 1 day). Bodily risk-taker. I think (willfully) slamming his head into walls, people, couches, etc. along with having zero fear at playgrounds qualifies him for this one. "Enjoy rough-and-tumble play, and frequently are the children who take this too far and, without intending to, end up hurting a playmate." I believe tackling his brother, random kids at play areas and adults holding babies at formal events qualifies him for this one. Happy and adaptable. Definitely. Pretty much everything they had to say about impulsive children related to Joseph. Now I just need to figure out how to get the boy potty trained before...... 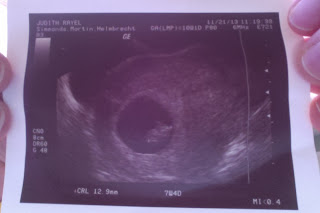 6) So far the pregnancy has been fine. A little harder than the others, but manageable (it would be pretty hard to be easier than my other pregnancies). The exhaustion is harder to deal with simply because I have two other little people to look after all day. And this time around I've had afternoon/evening sickness which I've never had before. Really all this has meant is that the bare minimum has been getting done around here - laundry gets done, meals are (usually) on the table, boys are alive. This is one of the reasons the blog has basically been ignored. It's also the reason that I took exactly zero pictures over Christmas, so I'm relying on my sisters for pictures of Christmas 2013 (the ones in this post are from my sister - thanks Julia!).
I'm finally about to enter my 2nd trimester, so I'm hoping to do a little more blogging (but I make no promises). Maybe I'll even take some pictures of the boys this month :)

7) We're excited to be adding another sweet baby to the mix, but I'd be lying if I said I'm not even a little bit nervous to have 3 under 3 3 two and under (that sounds scarier, right?) for a few days. Buuuut, we're getting a minivan (no more manual locks! or manual windows! and I'll get cruise control! and spaaaaaace!) so all will be right in the world...or something like that.

Thanks for an easy way to re-enter the blogging world, Jen!
Posted by Betsy at 2:30 PM 5 comments: Links to this post

Betsy
Hi, I'm Betsy! Wife to my wonderful husband, Will. Mother to my two sweet boys, Joseph and John. Join me as I document our family adventures and figure out how to be the best wife and mother I can be.